An object storage suitable to store over 100 billions immutable small objects was designed in March 2021. A benchmark was written and tested to demonstrate the design could deliver the expected performances.

Based on the results presented in this document, hardware procurement started in July 2021. The Software Heritage codebase is going be modified to implement the proposed object storage, starting August 2021. The benchmarks will be refactored to use the actual codebase and run on a regular basis and verify it performs as expected. 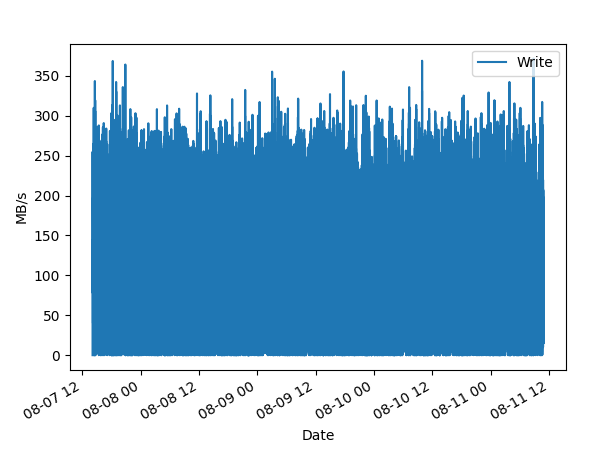 Simultaneously, over 23,000 objects per second (~100MB/s) were read, either sequentially or randomly. 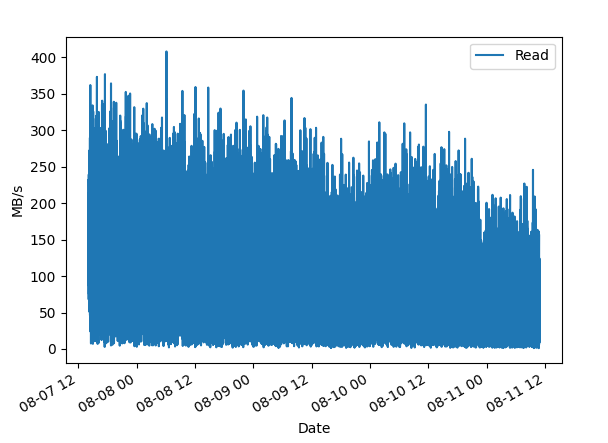 The time to randomly read a 4KB object is lower than 100ms 98% of the time. The graph below shows that the worst access time never exceeds 3 seconds over the entire duration of the benchmark. 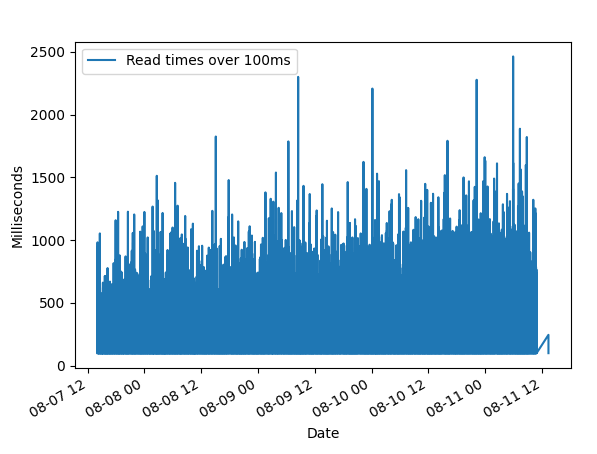 The results show that the read performances degrade over time. This was discovered during the last run (August 2021) of the benchmark which lasted five days. All previous runs (between April and July 2021) lasted less than three days and this degradation was not detected.

A preliminary analysis suggests the root problem is not the Ceph cluster. The benchmark software does not implement throttling for reads and this could be the cause of the problem.

The hardware provided by grid5000 consists of:

Note: The machines have additional resources (network, disk) but only those used in the context of the benchmark are listed.

A single process drives the benchmark on a dedicated machine. It runs multiple write workers, each in a separate process (to avoid any lock contention) which report how many objects and bytes they wrote when terminating. It runs mulitple read workers in parallel, also in separate processes, because they are blocking on reads from RBD images. The read workers report how many objects they read and how many bytes in total. The objects per second and bytes per second and other relevant measures are stored in files every 5 seconds, to be analyzed when the run completes.

A write worker starts by writing objects in the Write Storage, using a payload obtained from a random source to avoid unintended gain due to easily compressible content. The Global Index is updated by adding a new entry for every object written in the Write Storage. The Global Index is pre-filled before the benchmark starts running to better reflect a realistic workload.

A read worker opens a single Shard and either reads objects:

In both cases it stops after reading a few megabytes to keep the processes short lived and rotate over as many Shards are possible so that the content of the Shard is unlikely to be found in the cache.

The time it takes to read an object at random is measured and they are stored in a file when it exceeds 100ms. It is interpreted as the time to first byte although it really is the time to get the entire object. However, since the objects are small, the difference is considered marginal.

The writers compete with the readers: without any reader, the writers will perform better (object per second and bytes per second). The number of read workers is set (trial and error) to deliver the desired performances (more workers means better performances) without hindering the writers.

There are –rw-workers processes, each of them is in charge of creating a single Shard. When a worker completes, another one is created immediately. It stops after –file-count-ro Shards have been created.

The size of each Shard is at least –file-size MB and the exact number of objects it contains depends on the random distribution of the object size.

There are –ro-workers processes. Each process picks a Shard from the Read Storage at random and a workload (sequential or random).