The Software Heritage project mission is to collect, preserve and share all software that is available in source code form, with the goal of building a common, shared infrastructure at the service of industry, research, culture and society as a whole. As of February 2021 it contains 10 billions unique source code files (or “objects”, in the following) totaling ~750TB of (uncompressed) data and grows by 50TB every month. 75% of these objects have a size smaller than 16KB and 50% have a size smaller than 4KB. But these small objects only account for ~5% of the 750TB: 25% of the objects have a size > 16KB and occupy ~700TB.

The desired performances for 10PB and 100 billions objects are as follows:

Using an off-the-shelf object storage such as the Ceph Object Gateway or MinIO does not meet the requirements:

A new solution must be implemented by re-using existing components and made available for system administrators to conveniently deploy and maintain in production. There are three ways to do that:

For reasons explained below (see “Storage solutions and TCO”), it was decided to design a new object storage and implement it from scratch.

In a nutshell, objects are written to databases running on a fixed number of machines (the Write Storage) that can vary to control the write throughput. When a threshold is reached (e.g. 100GB) all objects are put together in container (a Shard), and moved to a readonly storage that keeps expanding over time. After a successful write, a unique identifier (the Object ID) is returned to the client. It can be used to read the object back from the readonly storage. Reads scale out because the unique identifiers of the objects embed the name of the container (the Shard UUID). Writes also scales out because the Database is chosen randomly. This is the Layer 0.

Clients that cannot keep track of the name of the container can rely on an API that relies on an index mapping all known objects signatures (the Object HASH below) to the name of the container where they can be found. Although this index prevents scaling out writes, the readonly storage can still scale out by multiplying copies of the index as needed. This is the Layer 1. 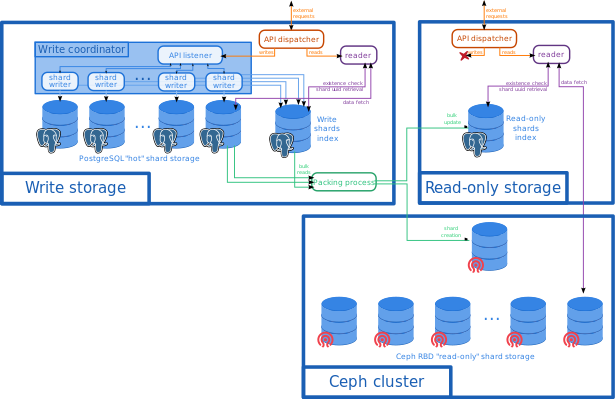 The key concepts are:

While the architecture based on these concepts scales out for writing and reading, it cannot be used to address Objects with their Object HASH alone which is inconvenient for a number of use cases. An index mapping the Object HASH to the Shard UUID must be added to provide this feature, but it does not scale out writes.

A successful Object write returns the Object ID. Writing the same object twice may return different Object IDs. The Object HASH will be the same because it is based on the content of the Object. But the Shard in which the Object is stored may be different since it is chosen at random.

A Global Index mapping the Object HASH of all known Objects to the Shard UUID is used to:

How does packing Objects save space?

The short answer is: it does not when Objects are big enough, but it does when there are a lot of small Objects.

In the simplest method of packing (i.e., appending each Object after another in a file) and since the Object HASH has a fixed size, the only overhead for each object is the size of the Object (8 bytes). Assuming the Shard containing the Objects is handled as a single 100GB Ceph RBD Image, it adds R bytes. If the underlying Ceph pool is erasure coded k=4,m=2 an additional 50% must be added.

Retrieving an Object from a Shard would be O(n) in this case because there is no index. It is more efficient to add a minimal hash table to the Shard so that finding an object is O(1) instead. That optimization requires an additional 8 bytes per Object to store their offset, i.e. a total of 16 bytes per object.

If Objects are not packed together, each of them requires at least B bytes, which is the minimum space overhead imposed by the underlying storage system. And an additional 50% for durability. The space used by Objects that are smaller than a given threshold will be amplified, depending on the underlying storage. For instance all objects in Ceph have a minimum size of 4KB, therefore the size of a 1KB Object will be amplified to 4KB which translates to a 35% space amplification. Another example is MinIO with over 200% space amplification or Swift for which packing small files was recently proposed.

To summarize, the overhead of storing M Objects totaling S bytes with M=100 billions and S=10PB is:

How does packing Objects help with enumeration?

For mirroring or running an algorithm on all objects, they must be enumerated. If they are not packed together in any way, which is the case with MinIO or Swift, they must be looked up individually. When they are packed together (one million or more), the reader can download an entire Shard instead, saving the accumulated delay imposed by millions of individual lookup.

If looking up an individual Object takes 10 milliseconds and Shards can be read at 100MB/s:

When looking for off-the-shelf solutions all options were considered, including distributed file systems such as IPFs and more and most of them were discarded because they had at least one blocker that could not be fixed (e.g. no feature to guarantee the durability of an object). In the end a few remained, either including the following features or with the possibility for a third party to contribute them back to the project:

Does not have stable releases and testing

The performance goals, size distribution and the number of objects in Software Heritage are similar to what is described in the 2010 article “Finding a needle in Haystack: Facebook’s photo storage” that motivated the implementation of SeaweedFS in 2013 or Ambry, the object storage published in 2017 by LinkedIn to store and serve trillions of media objects in web companies.

Contributing to SeaweedFS or Ambry so they can be deployed and maintained would require:

Does not provide object packing

Contributing to RGW, MinIO or Swift to add object packing would require:

EOS is based on Ceph and architectured for packing large objects in RBD. However, it is not designed to scale over a few billion objects. Contrary to Ambry, Swift and other similar solutions, it delegates storage to Ceph which make it easier to modify and release without risking data loss or corruption. Instead of modifying EOS to scale to 100 billions objects, it is more practical to:

Since no solution can be used as is, some work must be done in each case and the effort it requires should be compared. It is however difficult because the nature of the effort is different. The following factors were considered and aggregated in a TCO estimate.

In a nutshell, implementing an alternative to EOS from scratch has the lowest TCO estimate, primarily because it is independent of the underlying distributed storage.